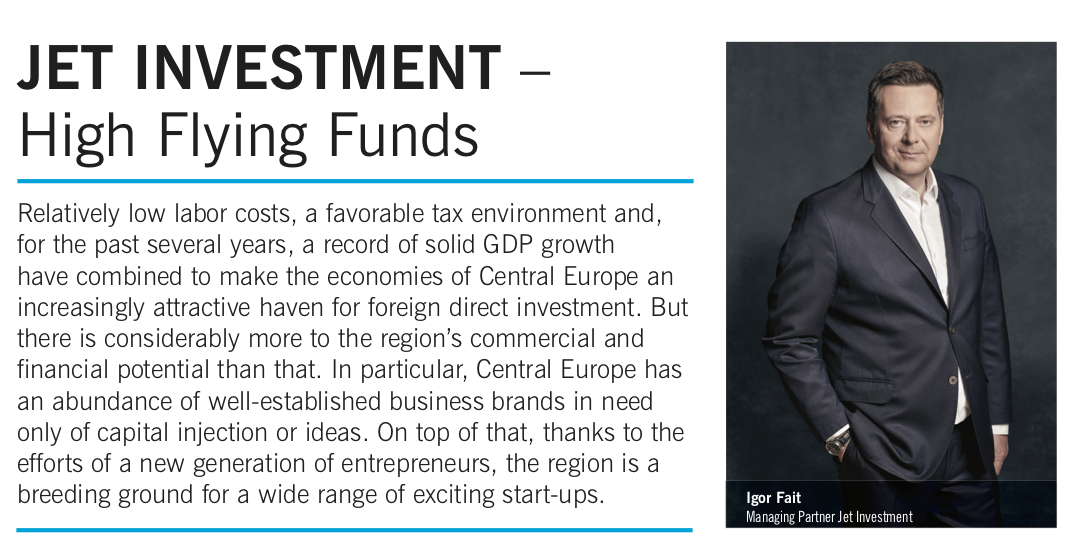 Relatively low labor costs, a favorable tax environment and, for the past several years, a record of solid GDP growth have combined to make the economies of Central Europe an increasingly attractive haven for foreign direct investment. But there is considerably more to the region’s commercial and financial potential than that. In particular, Central Europe has an abundance of well-established business brands in need only of capital injection or ideas. On top of that, thanks to the efforts of a new generation of entrepreneurs, the region is a breeding ground for a wide range of exciting start-ups.

But though the region’s potential may be making the international investment community sit up and take notice, it is certainly not news to the Czech Republic’s Igor Fait, the Brno-based philanthropist who is also the power behind Jet Investment. Now in its 22nd year, Fait’s company has breathed life into more than 25 industrial enterprises and, thanks to Jet’s astute management and development skills, sold them on at an average internal rate of return in excess of 25% per annum.

Though much of Jet’s activity is focused on the relatively unglamorous world of manufacturing, its achievement in turning around Less & Timber, a wood processor and glued bulk quality log manufacturer, would make any investment company proud. When Fait bought Less & Timber at the beginning of 2015 and put it into his Jet 1 investment fund, the company was, effectively, bankrupt. By the time he sold it less than four years later, it was generating profits of $6.6 million – and Jet had recouped its investment six times over.

Fait attributes much of Jet’s success to its hands-on approach. “We are not a passive investor, and we are not like other private equity funds, where the management meets once a month,” he says. “We make an effort to actively control it and manage any company we buy, and each of them has its own project director, who is the employee of the investment company and is in contact with the executive management of the acquired company almost every day.”

Jet 1 was launched in 2015 and in the process turned the group from a vehicle for private equity into an investment company regulated by Czech National Bank -- and licensed to manage qualified investor funds. Thanks to the company’s track record and Fait’s formidable reputation, people were soon knocking on the door to get a piece of the action. Within six months, private investors had entrusted Jet 1 with around $150 million. Jet used those funds to acquire a number of ailing businesses, predominantly in the rail and automotive manufacturing sectors, in power and industrial engineering, and in the field of composite materials.

Last year, with the Jet 1 investment monies successfully invested, Fait launched Jet 2. The new fund was met with as much -- if not more -- enthusiasm than Jet 1, with private and institutional investors quickly signing up. “We want to continue our involvement in the automotive sector but to a lesser extent than in Jet 1,” Fait says. “This time, we want to develop a platform for composite high-tech materials and products, which in our view is an extremely promising new area.” Here too, he intends to actively manage the companies concerned to help them realize their full potential and maximize their value. The fund closed last November with $180 million in capital commitments, making it the largest private equity fund of its kind in the Czech Republic.

Nor is it only Czech citizens and financial institutions looking to benefit from Fait’s Midas touch. Many of those international investors who have Central and Eastern Europe in their sights are keen to put money into Jet Investment. To oblige them, its owner is currently drawing up plans for a new fund. Due to be launched in either 2021 or 2022, the Jet 3 fund will in all likelihood be based in Luxembourg. “We have already received expressions of interest from several financial institutions, funds of funds, and banks, and our decision to launch a new fund with them in mind is a natural progression for us,” says Fait. “We would like to invite more institutional investors to join us as we grow, and basing Jet 3 in Luxembourg will make it easier and more transparent for them to participate.” Well worth the wait.